Written and Directed by Gabriella Sipe

The only thing more terrifying than the blank page for a writer is the page that is only half blank. Writer’s block hits and your story grinds to a halt. Where do you go next? How will the story end? So many questions can weigh so heavy on a writer that they often feel burdened by a need to wrap things up. Writer’s Block Party is a short that tries to encapsulate that agony while also presenting the dilemma as a whimsical story of conquering your blockage.

Helena, a murder mystery writer, finds herself stuck on finishing her latest work. It haunts her at work as her characters come to life and hound her for bringing her story to a close. When she returns home with her characters eager to bring the mystery to a close, she shocks them all to reveal she doesn’t have a plan for the ending. She struggles to wrack her brain for a solution but just can’t find it. She even considers scrapping the story altogether.

This short feature thankfully doesn’t linger too much on its simple premise. The acting feels a tad lacking in how characters speak more with the bravado of projecting theater students than ever feeling like accurate articulations of writer fantasies. The tone is also pretty whimsical to the point where a lot of the dread that comes from writer’s block, in addition to the fantasy characters questioning their purpose, doesn’t feel as compounding.

This lightness does, however, bode better for the second act where Helena finds herself working out her dilemma by merely wracking it around in her brain for a bit. That much feels relatable and brings the film less out of its dreamlike wonderment for the writing process. The characters, however, feel more like ciphers for the components of writing than ever having any quirks of their own. Helena is simplified and that’s perfectly fine for her to act as a sort of surrogate for the writer audience. But her written characters don’t seem to leap off the page, seeming so simple it makes one question just how much these players are expanded upon in her own manuscript.

Writer’s Block Party does have some worth in that it may inspire some young writers to keep going and work out the issues of a story in their head. The ending gets a little too pie-in-the-sky by quickly cutting to Helena being a successful writer at a book signing (one assumes she’s a famous writer based on the reactions of those commenting on her book). However hard such a conclusion is to swallow, that solving writer’s block immediately leaps to success, it will certainly hold some inspiration for aspiring writers who need a small boost of relatable warmth. 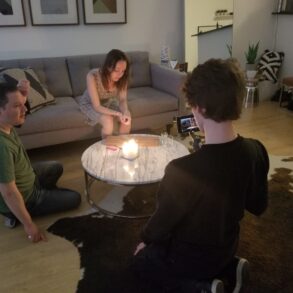